Write about the best/ worst date you've ever been on...

Oh man I wish I could steal some of Morgan Stallings stories... we are going to write a BOOK about some of her first dates :)  To be really transparent, I did not go on a lot of dates. I took guys to date parties in college, but I feel like we grew up in a time where it was the "group hang out" and not really the one-on-one dating type scenarios.

The BEST date would have to be my first date with Logan. If you haven't read our love story, I am just going to copy and paste from that post...

Spring 2008- A few weeks before Annie and Jono's California wedding, we were having a small birthday get together for Annie and brainstorming single, available ushers/groomsmen to set me up with for the weekend. (I was the only single gal left of my college besties) The "match making" game plan was to have a 1st String, 2nd String, and 3rd String in case I didn't hit it off with the first two! (They look out for me) As we were going through the names, I perked up at "Logan Misegades." He was playing semi-pro basketball in France and was flying in for the wedding.  After running through the roster, I agreed to NO strings, this was not football, this was MATCH MAKING... it was "Logan or BUST!"
A few weekends later, I walked into the hotel lobby in California and he was just as handsome as I remembered... I didn't acknowledge him right away b/c I didn't know if he was in on the "match making" and I didn't want to seem overly anxious. We hit it off to say the least. After he caught the garter, we missed MOST of the wedding reception because we were out on the balcony overlooking Hermosa Beach telling our life stories to each other. He scored a bottle of champagne, gave me his jacket, and we talked for hours. I was blown away... There were NOT boys like that in Dallas, in my experience! 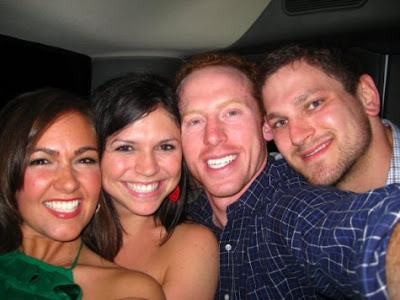 The whole weekend I was tried to be guarded because I knew he was flying back to France on Monday. HOWEVER, I vividly remember emailing my mom and a few friends telling them I think I may have met my husband... I still have the emails! Sure enough, he missed his first flight back since he was on standby. We hung out that night and he was acting really strange- not the same romantic, smooth guy from the weekend. I wrote him off later that night when my sister didn't approve and even turned down a lunch date for the next day. Much to my surprise, he did not get on his flight back to France the next day because he knew he had blown it with me... He called me from the airport, said he pushed his flight back a few days, and asked me out. I decided to give him one last chance...that was the least I could do, right? 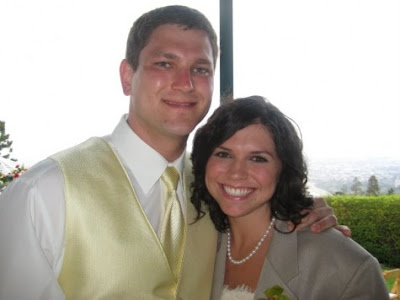 That night was our very first date... Highland Park Village Paciugos. He told me how he felt about me and I was cautiously hooked. I still didn’t know how this whole thing was going to work out with him across the world and no solid plans of moving back. Sure enough we talked every morning at 7am and every afternoon at 5pm. (Due to the time change). Over the summer, I collected quite a few phone cards and my whopping $1500 phone bill. After one brief visit in June for a wedding, he told me he loved me and that he was moving back to the states on August 11th... And (as they say) the rest is history :)