LOGAN GOT THE JOB!!!

Yesterday goes down in my book as one of the longest days of my life. I barely ate, was nauseous all day and watching my phone like a hawk.  YESTERDAY was the day Logan was going to hear back on whether or not he landed THE job. The one he really wanted and was holding out for.

Monday was his final interview and he walked out feeling defeated and like he had completely blown it.  And after talking with him... he had.  He got nervous, froze up, and wasn't able to really let loose and be himself.  He called the director back on his way home to own up to the fact that he'd blown it BUT that he knew he was the right fit for the job.  He sent an IMPRESSIVE sales pitch email Tuesday morning and was told he would hear something by end of day yesterday.

The entire work day went by and we heard nothing.  He came home last night at 5:30pm and still nothing.  The reason this was so stressful is that Logan's part-time job ENDS on Friday and other than this, we had no hot leads.  Logan had walked away from a few opportunities because they weren't good fits, hoping and praying that THIS ONE would work out.  Talk about sweating it out... at 6pm he called the director but his mailbox was full and he couldn't leave a message.  He called the office and didn't get an answer.  So he followed up via email reassuring them that he was the right person for the job and at 6:30PM last night he got an email telling him that they need him in the office on Monday at 10am.  It will be his first day of work!!!!!

When he got the email we were in shock.  We felt like the weight of the world had been lifted off our shoulders after months and months of disappointments and let downs.  We finally had our answer to prayer and we really do think it was a combination of GOD and MORGAN STALLINGS that got him this job because based off his interviews (and he will tell you this) he shouldn't have been hired.  So maybe that was God's way of saying that Logan can take zero credit for this gig, it was ALL God. Regardless, he has his work cut out for him to prove that this was not a mistake and that he WAS and IS the right guy for this gig.

What will he be doing? He will be working for Fusion Logistics in a new division that just started in April doing operations and sales.  There are only 4 guys on the team right now (including him) so he is excited about being a part of something from the beginning and sees tremendous potential for both personal AND professional growth.  I have never seen him light up the way he does when he talks about this job and company.  For the first time, I feel like he finally feels like he was given a shot at a career and didn't just take a job to pay the bills.  His goal is to someday be a director and to open up a regional office on the Eastern or Western coast so who knows where this gig is going to take our little family, but we are excited and ready for the adventure!

For now, we will be in Dallas. Saving up for a car and shopping around for a rental house or apartment... We don't care! :)

He is good.  His ways are Higher than ours.  His timing is always perfect. Thank you LORD for providing for us in our time of need.

AND CONGRATULATIONS TO MY FRENCHMAN!!!
I AM SO PROUD OF YOU AND YOUR PERSEVERANCE AND DETERMINATION AGAINST ALL ODDS!
I love you :) 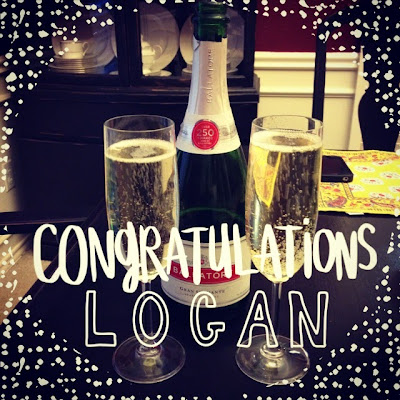