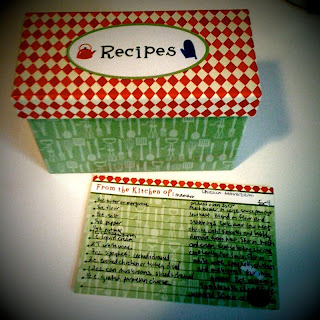 So if you remember my post a few weeks ago, my goal for the rest of the year was to try 1 new recipe a month. I got this recipe box as a wedding gift from my MIL and SILs filled w/ their scrumptious recipes, so Logan held the box and I literally drew 5 at random and he got to choose the one he wanted from the selection. This time it was.... CHICKEN TETRAZZINI. 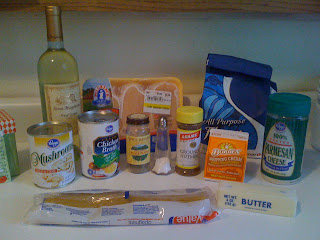 Okay lets be honest... I don't have these "ingredients" lying around my kitchen so I had to make a list and get most of them from the store... BUT I'll get there someday.
What you need for this recipe is:
7 oz of spaghetti noodles cooked and drained (that's a little over 1/2 the bag ladies)
1 cup of liquid cream (this can be found in the milk/ coffee creamer section)
1/4 cup butter
1/4 cup flour
1/4 T Pepper
1/4 T Nutmeg
1/2 T Salt
1 cup chicken broth
2 T White Wine
13 oz can of mushrooms (sliced and drained)
1/2 cup of grated Parmesan cheese
2 cups cooked chicken 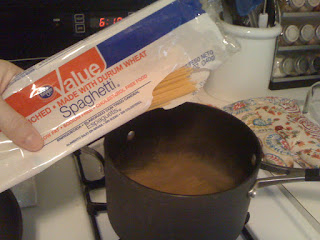 First thing's first... cook and boil your spaghetti noodles like normal. Drain them, then place them back in the bowl with a damp paper towel on top. This will prevent them from becoming hard and drying out. Set that aside. 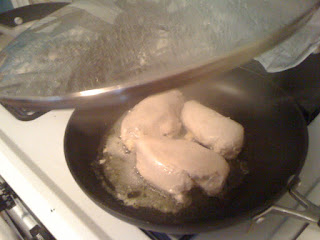 Meanwhile, pour a little olive oil in a skillet and cook 3 breasts of chicken. Unfortunately ours were frozen so they took awhile to thaw out before we could cook them- could have saved us some time! When you cook the chicken do NOT season it... just use butter or olive oil and cook 5 minutes or so on each side. (cut into it to make sure there is no pink in the middle) 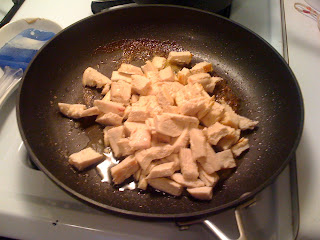 Once the chicken is done, slice it up into small squares. Measure 2 cups and put that much chicken back into the skillet. Eat the rest as a snack ;)
That's about all the prep work before making the main dish... set your oven to preheat on 350 and lets start part 2! 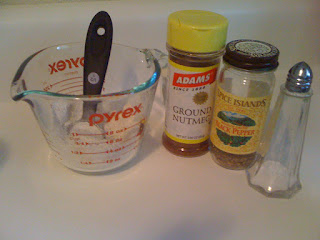 Melt butter in a large sauce pan over low heat. Blend in the flour and seasonings illustrated above. Cook over low heat stirring until somewhat smooth and bubbly. (it will look like not a lot and kind of grainy - see below) 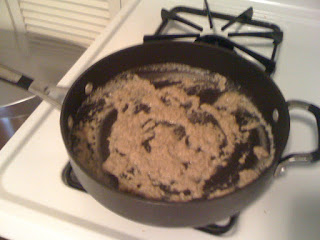 Remove from heat. NOW stir in the broth and cream. Heat to boiling stirring constantly for 1 minute. 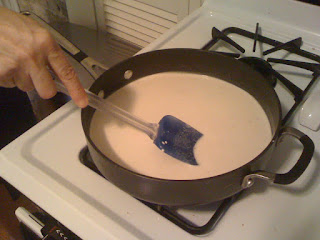 NOW its time to stir in the white wine, spaghetti, chicken, and mushrooms! Keep mixing until well blended. Remove from heat. 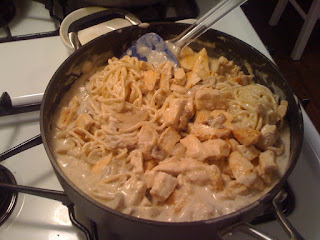 Use a 2 qt casserole pan (this will seem too small, but I promise, its not!) - make sure it is greased w/ either vegetable oil or PAM. 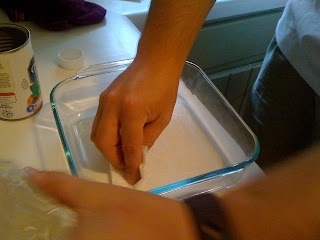 Pour the mixture into the casserole dish very carefully! Now its looking like a MEAL. 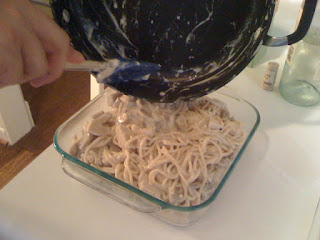 NOW sprinkle your Parmesan cheese on top. We didn't have the grated kind which would have been awesome- but I must admit, the powder kind that you put on top of spaghetti worked just fine :) 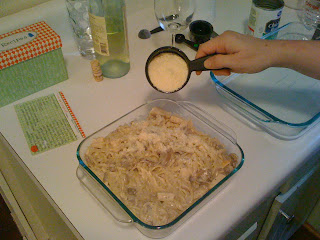 Stick the dish into the oven uncovered for 30 minutes or until bubbling. 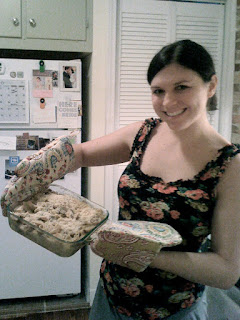 PHEW! That was quite the process, but honestly.... not too hard! 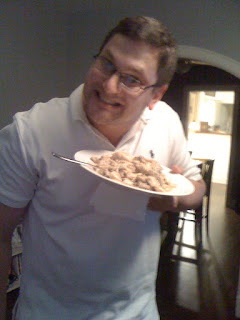 Logan LOVED IT and told me that this was a huge turning point for me... he said in the cooking world, this meal took me from receptionist to MANAGER haha- not bad! Thank you Maman Misegades for your awesome recipe! 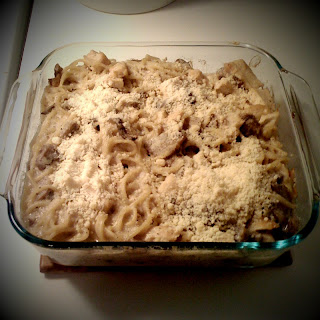 Tah Dah!!! Goal for August= complete.
This cooking thing really is fun when you have the TIME and the INGREDIENTS.
Hope everyone is having a good week... I CANNOT WAIT FOR FALL WEATHER AND CLOTHING!!!

Email ThisBlogThis!Share to TwitterShare to FacebookShare to Pinterest
Labels: Adventures in Cooking