So for our 1 Year Anniversary- Logan and I were given Southwest Airlines buddy passes from my bestie Joshua Neal (shout out!!!)

We looked online and although we love NYC and anything California... we decided to go somewhere different, that we had never explored before...we narrowed it down to Seattle and Boston. Logan is convinced we will live in Boston someday b/c it is old and feels more European / his taste... so I figured, if we are "going to live there" we should probably go visit first! 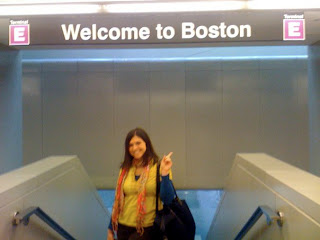 We had to get up at 4am...but it was well worth it and we had no problem w/ standbys that early! 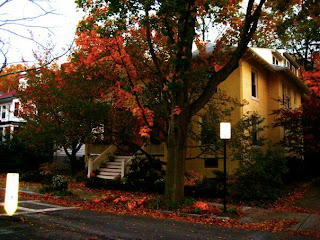 We are trying to save money so I did a ton of research on where to stay... we felt like a Bed & Breakfast would be a blast and that way we could rub elbows w/ the locals in an actual neighborhood- ya know, part of the cultural experience. I found On the Park and it had RAVING reviews on Trip Advisor, so we booked it! It was cheaper than the Holiday Inn...are you kidding? Do you see how adorable it is!!! 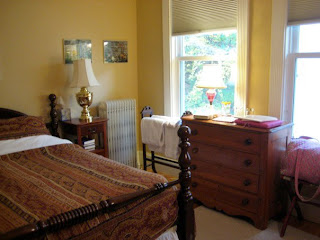 It is a family's 100 year old house...they raised their 5 kiddos in it and after the last one went off to college, the built a 3rd story and live up there- and rent out the other rooms as a B&B! It was walking distance to the T Train which took us straight into Boston and when you walked out the front door you literally walked into a park filled with laughing kiddos and their parents and old men reading their newspapers. It honestly felt like a movie set- it was also cute b/c the whole neighborhood was buzzing about Halloween and setting up for their Trick or Treaters! 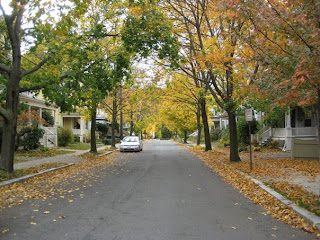 This was on our walk to the T.... not a bad little neighborhood eh? 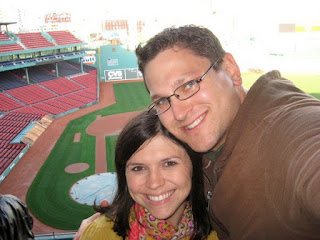 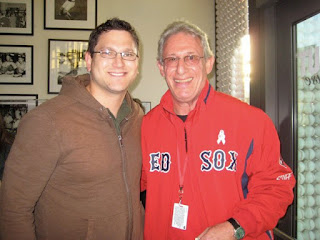 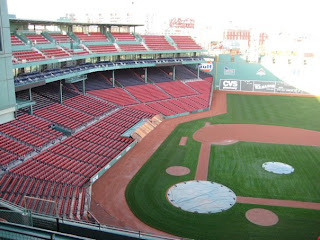 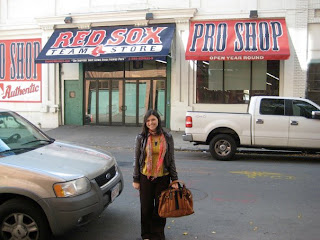 The first thing we did once we put up our bags was go on a tour of Fenway Park...it was really neat to hear all about the history, but also b/c we just saw THE TOWN w/ Ben Affleck and the ending scene was shot at Fenway...so they pointed out several places where it was shot and told us they built a screen and actually had the movie premier right in the center of the field- pretty cool! 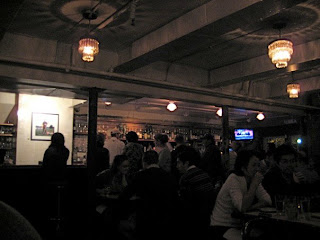 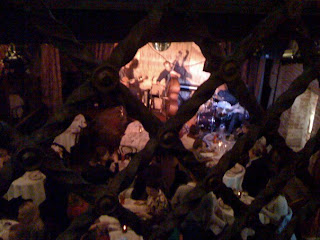 I got both of our restaurant recommendations from Erin Gates over at her blog. The Beehive did not disappoint! We were sat at a table overlooking the stage where there was live jazz music being played. Straight ahead of us at eye level they had old timey movies playing on a brick wall w/o sound- just the jazz in the background. It was concrete, exposed brick warehouse meets chandeliers and fine cuisine... I even took pics of the bathrooms they were so cool, but I will refrain :) If you are bored- go to their site and do the virtual tour- my pics don't even do it justice! 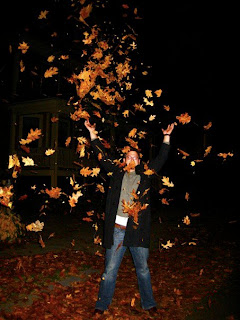 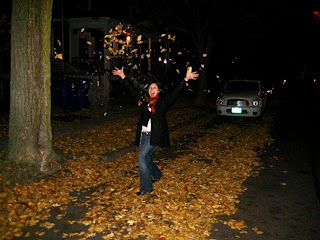 Being from Texas...our leaves go from green to bare.... so I was infatuated w/ all these orange leaves... We had some fun w/ them on our walk home from dinner! (that's the cool thing... the city really isn't that hard to get around and people walk EVERYWHERE... so neat!) 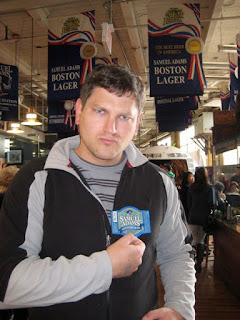 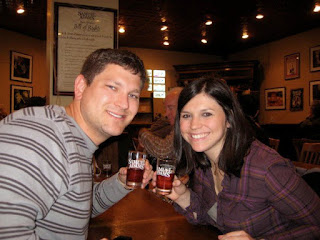 Up and at 'em!!! The next morning we headed over to the Sam Adams Brewery for a tour and a tasting! It was so much fun... the tour guide was really funny and we got to try 3 different beers- one of which is only made and served at their Annual October Halloween Party! 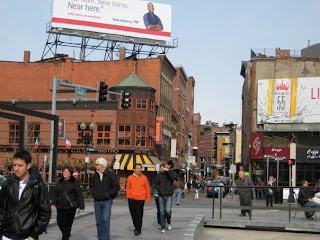 We walked over to the North End for lunch- its famous for its family run Italian restaurants and pastry shops... BOTH of which we had- Canolis from Mikes Pastry and I tried Clam Chowder for the first time in my life... it was amazing! (I have heard now that I have tried it in Boston, it probably will disappoint big time in Texas, ha!) 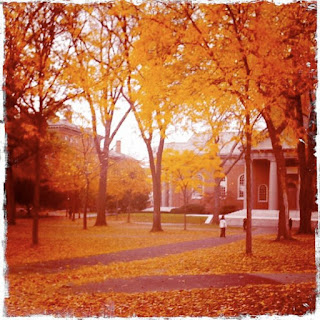 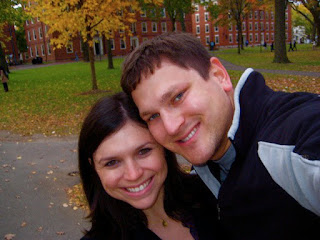 Later that afternoon we mozied on over to Harvard. It was magical. The campus was tiny and beautiful and orange/ yellow/ red!!! I kept thinking about how Mark Zuckerberg went here and even snapped a photo of The Social Network playing at the Harvard Square Loews Theatre (dork). We walked around and gawked at all the smart kids wondering what it would have been like to be smart enough to go to school there! haha 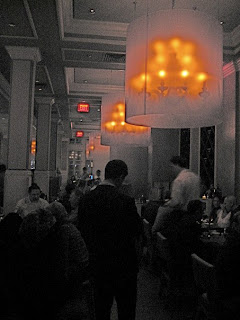 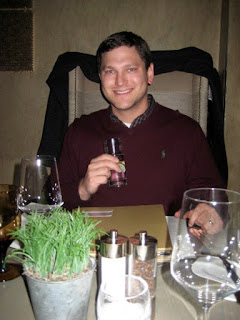 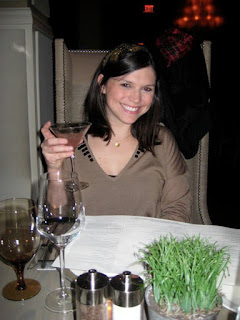 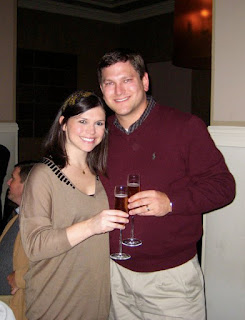 This was the meal I was MOST looking forward to... Mooo was AMAZING! (Thanks again, Erin Gates). When we arrived Logan had arranged for champagne to be delivered to our table as a surprise- he knows me too well! We had an UNREAL steak dinner, lobster bisque, and some heavenly smore's inspired chocolates for dessert. The atmosphere was impeccable- probably the fanciest restaurant I have ever been to. We exchanged cards and gifts and the Rangers won... Yay Rangers and Yay Love!!!
(I gave Logan a Shutterfly book with pictures and captions from our 1st year of marriage and made a slide show on my computer that went along with it! My plan is to do one every single year so we can remember big things that happened each year.) 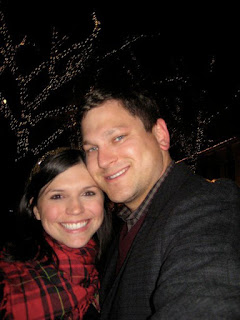 This is on our cold brisk walk home... we were going to try and go out but we were too full and too tired... lets just say that Boston Halloween-ers did not disappoint on the T- ride home... Boston and the surrounding areas have over 75 colleges and universities...so it was great entertainment and people watching. We felt like old farts haha! 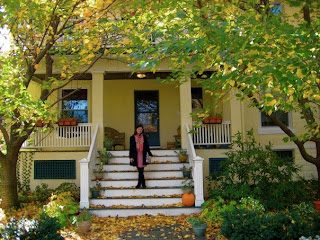 This picture was snapped as we were leaving our place :( So sad! We will come back someday, I assure you!!! (Maybe even to live? the winters REALLY make me nervous though)
On our last day we went shopping on Newbury Street and had some hole-in-the-wall Asian cuisine... I love that Boston is full of authentic cool restaurants and not jam packed w/ chains! It was so fun and refreshing- highly reccommend it :) 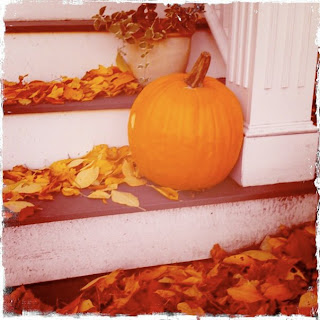 We made it home on HALLOWEEN w/o any issues on standby (but it was a CLOSE call...down to 1 open seat on our flight to St. Louis) We zipped home, got our Halloween candy ready for trick or treaters, and turned on the Rangers... not a single one came to our house (Did Rangers trump Halloween this year?) Now we have all this candy sitting around everywhere- no bueno! haha
Overall- New England is the most charming place in the Fall. I have never been somewhere like it. I liked it better than Chicago and I am still undecided if it beat out San Fran... I am so glad we went and experienced it together. There was still SO much we wanted to see, but ran out of time... Boston, we love you and we WILL be back!
Posted by Abby at 1:16 PM