When people ask where we live this is how it normally plays out. 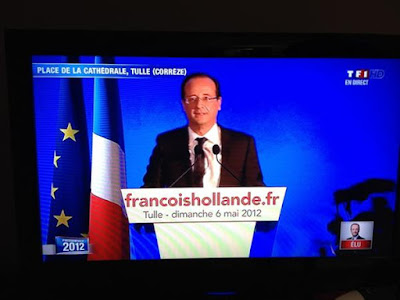 Well now that our new FRENCH PRESIDENT has been elected, I am pleased to announce that the entire country of France (and hopefully the rest of the world) now know where TULLE is because Francoise Hollande is from there!   As we were watching the announcements on Sunday night, Logan's old principal from high school popped up on the screen (pictured below in the upper left corner wearing the white suit).  Logan freaked out and then remembered his principal went on to become the Mayor of Tulle.  Not to shabby to go from Principal to Mayor! My brother-in-law even drove to Tulle to witness all the action firsthand.  The speech went down right across from The Abbey where we grab dinner and drinks after basketball games! Pretty cool, right? 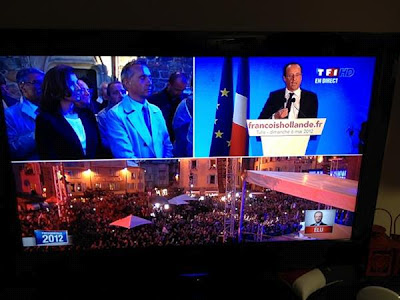 Disclaimer: I will be honest. I don't care about politics. American OR French. I did not research platforms, read up on the candidates, or anything like that.  I was rooting for Hollande merely because I had an encounter with him in December at a Marche de Noel AND he is from Correze (our Department) - more specifically Tulle - the city next door to us where Logan plays basketball and where I go shopping.  So from my point of view I was rooting for a local team, like the Dallas Mavericks, instead of policies and platforms... and my TEAM won!  PLEASE NOTE: My husband did NOT vote for Hollande and rolled his eyes when I became so excited that he won.