The Miracles Behind Mohawk

I haven't been able to tell the masses the full story behind our recent move so I thought I would take a minute this morning and walk you through how it all happened... IN SIX DAYS.

In order to do so, I need to back up.  61 days before Andrew was born, our landlord told us that he wanted to put our house on the market and we needed to be out in 60 days.  This was my SECOND time to move in my third trimester and I was a mess about it.  Due to the timing, we were not able to be picky about the neighborhood or the house.  Thank God we had a couple from our community group who had a GORGEOUS rental home available right away! It was (and still is) the nicest and most updated home we have ever lived in.  They were so gracious and didn't make us sign a lease or put down a deposit.  We had no idea how long we would be in that home and it felt nice to just LAND somewhere and figure out the rest later.

Fast forward to February of this year.  My sister was approaching her due date with her first baby and the second she went into labor, I was going to hop in the car with my Mom and Andrew and drive to Illinois to be at the birth.  As we were all sitting around waiting for Dottie to make her appearance, I was able to go to our neighborhood Kindergarten roundup.  Originally, I was not supposed to be in town for it.

I will leave out the name of the school, but I left kinder roundup crying.  Although we were living in the most beautiful home, I did NOT have a peace about the school.  I also put our name in a lottery for the local magnet school, but there was no guarantee that we would get into that school.  The beauty of that school was that we would not have to move so Logan and I started researching the school, taking tours, and going to info nights there.

For some reason I STILL did not have peace.  Paperwork for the magnet school was in but I was not settled in my spirit.  The VISION I had for my family was to live in a neighborhood with a lot of young families.  I also dreamt of a "front yard neighborhood." One where people were outside and interacting with each other instead of isolated within their homes.

On Dottie's due date, I  got a text from a good friend of mine that Mohawk (which historically NEVER has spots for incoming kinder) had an unusually small kinder roundup and that I should get my transfer paperwork ready.   I talked to several folks within the district about transfer approvals in RISD.  Well, let's just say... They don't happen.  You have to have a family member on staff or a signed lease or contract on a house in the neighborhood in order to transfer to a school.  The reason behind this is to encourage neighborhood kids to attend their neighborhood school.

So transferring was out of the question and I nervously brought up the topic of moving (AGAIN) with Logan.  It was the only way I knew we would for sure get into the school.  Now I know that for some, kindergarten is not a huge deal.  Logan was not thrilled but he could tell that putting Stella in the RIGHT school was very important to me.

My friend Ashley told me about a rental house ACROSS THE STREET FROM HER.  I went to look at the house by myself on Thursday night.  It was essentially a 1965 home that had been minimally updated but possessed a ton of character.  It was hard to grapple with going from a very updated, modern home to what I endearingly called a "grandma house" but my friend reminded me that this decision needed to be for STELLA and NOT for me.  Humbling and SO true.

Logan told me that night that he would be open to seeing it but he was not about to sign a lease on a home if I had never stepped foot inside the school.  So Thursday night I called and left a message to see if I could come take a school tour sometime soon and that we were considering moving to the neighborhood.

On Friday, both of my parents made the decision to go ahead and drive to Illinois since Katy was now several days PAST her due date, it was the weekend and that would ensure they would likely be AT Dottie's birth instead of in the car.  I knew that I needed to get this kindergarten thing wrapped up so I told them to go ahead without me.  Funny enough, the PRINCIPAL called me on Friday and asked if I could come in for a tour with her later that afternoon.  So I said YES!  Meanwhile, Logan found a ROUND TRIP AIRFARE TO ILLINOIS FOR $90.  That is including taxes. WHAT ON EARTH!!! This was not only in our budget, but saved Andrew and I from 2 very long car rides that I was anxious about with a baby.

I completely clicked with the principal during the tour and by the end, I was completely drinking the Koolaid.  Everything about their approach to education to the fact that most families walk to school every day, had me SOLD!  I left giddy and came home and told Logan I don't care if we live in a shoebox but our kids need to go to this school!

Logan and I went and looked at the house and filled out a rental application.  Word was getting out that Mohawk had kinder openings, so there was increased interest in the property and we were just praying it would work out in our favor.

We got chosen for the house and had the lease emailed over to us.

I went up to Mohawk and enrolled Stella in kindergarten.  ALSO THE SAME DAY THAT MY SISTER WENT INTO LABOR!!!!

My $90 flight was already scheduled for Tuesday morning so I got to meet Dottie when she was just 24 hours old!

Some may call all of this coincidence, but I know it was God very clearly directing my steps.  I think Dottie going past her due date was all part of His plan.  Had Katy gone into labor the week before, NONE of this would have happened and the rental would have gone to someone else.  I think the wisdom my friend Ashley spoke over me. The timing of the school tour. The rental house. The $90 round trip tickets.  ALL OF IT. He orchestrated FOR ME.

God is in the details, friends. He cares about every aspect of our lives. And I have never been more certain that this is where He has us.

We couldn't be more thrilled with our new neighborhood.  We have had cookies, brownies, a goodie basket and candle delivered as Welcome gifts.  Neighbors continue to come over and introduce themselves.  My kids played basketball with our backyard neighbors this weekend and we found out that they also go to our same church.  Never in our 8 years of marriage have we lived in such an inviting and warm neighborhood. The house might be more outdated than our last house, but it feels like HOME. We intend on PLANTING here. 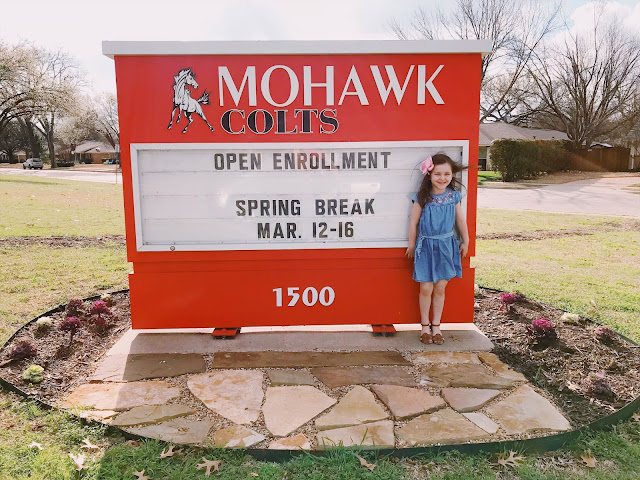